6 Wedding Cake Traditions and Where They Actually Came From

Ever wondered why some couples save the top layer of their cake or where grooms cakes came from? We were curious, so we did a bit of digging to bring you the origins of these sweet wedding cake traditions.

In “the olden days,” married couples often had children much earlier than couples do today. It certainly wasn’t unusual to have a child within the first year of marriage. And as wedding cakes grew taller, the top layer was often left over. Religious newlyweds quickly recognized the leftover confection as a perfect dessert for the (undoubtedly upcoming) christening.

Of course, couples eventually started putting off having children, and that frozen layer only stays edible for so long. Now, the one-year mark is the the more common occasion for devouring the sweets. 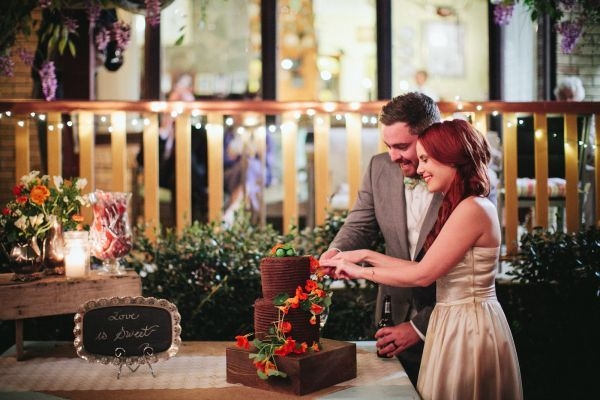 Photo by Feather and Stone on Inspired By This

2. Cutting the cake together
Well, obviously you have to cut the cake to serve it, but we’re talking about the big event of cutting wedding cake. This tradition hasn’t endured just because it’s an adorable photo op! Slicing the cake is the first task or activity the newlyweds do together, so it’s a special moment.

Historically, the cake was cut by the bride alone (as a symbol of losing her virginity…uh, awkward). But as cakes became bigger and more intricate, it became more difficult for the bride to do it alone, so she’d enlist the help of her new hubby. While we’re pretty sure a bride could totally manage to cut a cake on her own, most couples continue to cut the cake to carry on the sweet tradition.

Also worth noting: The cake cutting is typically the last “event” of the night, so it gives your guests a cue that it’s OK to head out. 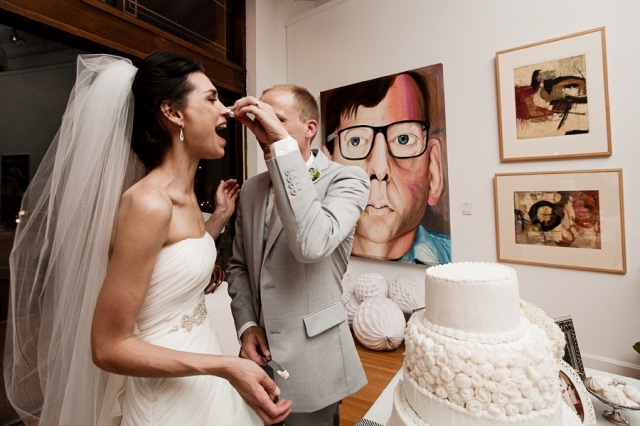 3. Smashing cake in each other’s faces

Not everybody is into the idea of smearing frosting all over their partner’s face, but its silly nature has kept this tradition going! Turns out that messy food traditions have been in place for years.

For example, in Yorkshire, the bride would eat a small piece of bride’s cake (which was more of a pastry than the cakes we think of today). Then, she’d throw the rest of the cake over her head to ensure a life of wanting nothing (and to ensure a huge mess to clean up). In even older times, the groom would break bead over the bride’s head and guests would pick up the crumbs.

It’s not totally clear how we got from picking up crumbs and throwing cake to smearing frosting across someone’s face, but one thing’s for sure — brides and grooms have always played with their food! 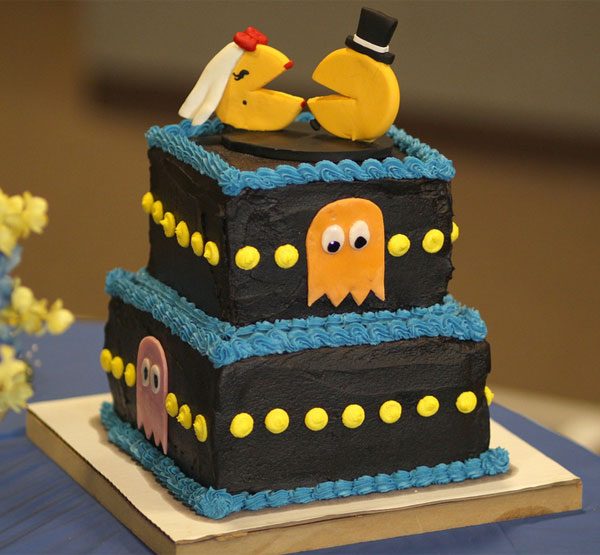 Grooms got a little jealous of the bride’s cake, so by the 17th century, the desserts were made in pairs — a bride’s cake and a groom’s cake, which was typically a small fruitcake. But instead of being served at the reception, the groom’s cake was cut up, packaged and given to guests as favors.

The tradition of groom’s cakes actually died out in the U.K. after a while, but resurged in the U.S. more recently. Of course, groom’s cakes now aren’t fruitcakes but more creative creations.

These days, white frosting and cake are far from required for weddings, but white was the norm for quite a while.

There’s the whole white symbolizing virginity and innocence thing, but the real reason was more for practicality than tradition or symbolism. Icing is made of sugar…and sugar is white. But as time went on, a whiter-than-white frosting became a status symbol — a more refined (and expensive) sugar resulted in a purer white.

Another fun tidbit: “Royal icing” got its name from Queen Victoria and Prince Albert’s cake in 1804, which was decorated in white.

That’s a tradition that likely stems from a different baked good. In medieval times, spiced buns were stacked as high as possible in a giant pile. If the newlyweds could kiss over the tower of pastries, they’d be in for a lifetime of prosperity. As wedding sweets moved from buns to cake, chances are that nobody wanted to do away with the towering display of dessert.

Who knew that dessert could be so symbolic? Of course, some of the symbolism has worn off over the years, so if any of the weird roots make you uncomfortable, just know that most people won’t relate the tradition to its unusual origins. And like all wedding traditions, none of these is mandatory! Want a purple cake? Go for it!

8 of the Sweetest Alternatives to a Traditional Wedding Cake

5 Tips for Figuring Out Your Wedding Cake Style

Planning a wedding? Get the step-by-step wedding planning guide.