Feeling super exhausted from all that wedding planning? You’ve earned a little break. Kick back and prepare to be inspired by our favorite movie and television scenes about wedding planning.

Here are 25 tips we’ve learned from the silver screen. 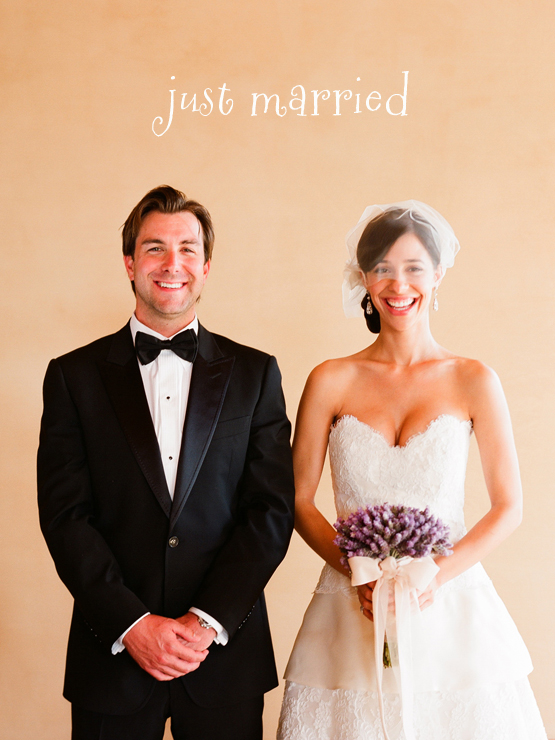 Photo by Kiss the Groom on Loverly

1. Your wedding should reflect your personality.

Parks and Recreation: For Leslie’s wedding to Ben, her best friend Ann creates a one-of-a-kind dress by sewing meaningful documents and photos from Leslie’s career into a skirt. The result looks fashionable and adds a personal touch to the proceedings.

2. Talk to your partner about his or her vision for the wedding, too.

Sex and the City: When it comes to Carrie’s wedding to Mr. Big, she goes all-out and plans an epic ceremony. The problem? She doesn’t consider that her groom wants something more intimate. She’s devastated when he doesn’t show up and soon realizes that she shouldn’t have let the day get “bigger than Big.”

3. A wedding planner can be a lifesaver.

The Twilight Saga: Breaking Dawn: When it comes to her marriage to Edward, Bella is not at all interested in planning an elaborate ceremony. Instead, she passes the job off to Alice, her enthusiastic future sister-in-law. It turns out to be the right decision — check out the gorgeous forest setting:

4. For better or worse, you’re marrying into a whole new family; do your best to embrace them.

My Big Fat Greek Wedding: Toula’s family can be a little overbearing sometimes (okay, all the time!). To Ian’s credit, he handles the meddling rather calmly and even agrees to be baptized in the Greek Orthodox Church. Since the couple is still together in the upcoming sequel, it looks like they found a way to make it work, crazy family and all.

5. Savor the moments, both big and small.

The Office: After years of romantic tension, Pam and Jim finally got hitched in the sixth season. As they get ready for their big day, Pam proposes that they take “mental pictures” of important moments. During an emotional scene later on, Pam is upset because she ripped her veil, so Jim cuts his tie to make her feel better. So sweet!

6. Set aside time to hang out with your significant other.

Shrek: Romance is great, but one of the nicest aspects of Shrek and Fiona’s relationship is their close friendship. Before they actually get together, they enjoy just goofing around together. All those laughs and shared memories only bring them closer together in the end.

Love Actually: After her wedding, Juliet is disappointed to find out that she has no good footage from her big day. However, she noticed Peter, her husband’s best friend, was filming, so she asks to take a look at what he shot. What she doesn’t realize is that Peter is secretly in love with her, so he filmed no one but her the whole time. #awkward

8. Remember that this is an emotional time for your parents, too.

Father of the Bride: Respect your parents’ wishes, but if you feel strongly about something, stick up for yourself. And don’t forget to thank them for their help after! When Annie announces she’s engaged to Bryan after just three months, her father is (understandably) not thrilled. Plenty of wacky antics ensue — including George getting arrested at the supermarket — but he eventually learns to accept his new son-in-law.

9. Meet with your officiant in person.

The Princess Bride: “Mawage. Mawage is wot bwings us togeder tooday.” He might be called The Impressive Clergyman, but unfortunately, you can barely understand a word said by the man presiding over Princess Buttercup and Prince Humperdinck’s nuptials.

10. Let your partner have some time with his friends.

I Love You, Man: Peter’s always been more of a “girlfriend guy,” so when it comes time to pick a best man, he realizes he needs to befriend some guys. His relationship with new buddy Sydney weirds out his fiancée, Zoe, at times, especially when she finds out Peter’s been talking about their sex life. But ultimately, she understands that every man needs a little bro time once in awhile — especially to blow off some wedding-planning steam!

27 Dresses: Jane has been a bridesmaid 27 times, and she’s got the wardrobe to prove it. Most of the dresses are so ugly, it’s unimaginable that someone would actually ask a friend to wear one (never mind pay for it too!) Luckily, at Jane’s own wedding later on, she recruits 27 friends to act as her bridesmaids, so the dresses each get one more use.

12. If something doesn’t feel right, don’t ignore it.

Gilmore Girls: Lorelai loves Max, but as her wedding date approaches, she doesn’t seem as enthusiastic as she should be. It all comes to a head on the night of her bachelorette party, when her mother fondly remembers how she used to try on her own wedding dress every night when she was engaged. After Lorelai breaks up with Max, she sadly tells Rory, “It’s because I didn’t want to try on my wedding dress every night.” While it’s a difficult time for everyone involved, Lorelai ultimately made the right decision for herself.

13. Feeling nervous or stressed? Never underestimate the power of a good sing-along.

My Best Friend’s Wedding: The film’s best scene is when the entire rehearsal dinner bursts into song with “I Say A Little Prayer.” Even the miserable Julianne — who desperately wishes she was the one marrying Michael — breaks out a smile. (Another lesson to be learned from this one? Don’t make a marriage pact with your best friend. Just don’t.)

Full House: Before their wedding, Rebecca mentions to Jesse that her family has a tradition of celebratory square dancing. She soon has the whole gang practicing in the living room (much to Jesse’s dismay!).

15. Give your toast-makers some guidance on how long they should talk (and off-limits topics).

Sherlock: At Watson and Mary’s wedding, best man Sherlock gives a toast that lasts the majority of the 86-minute episode. (He starts talking about an unsolved mystery and gets caught up in solving it, naturally.) While the absurdly long speech is interesting in this instance, your family probably doesn’t want to listen to your college friend ramble on about the good ol’ days for more than a few minutes.

16. Schedule your bachelor or bachelorette parties well in advance of your big day.

The Hangover: Two days before his wedding, Doug and his friends go to Las Vegas for a truly wild night. In fact, things get so crazy that when the groomsmen wake up the next morning, they have no memory of what happened — and they’ve lost Doug! That phone call to Doug’s fiancée, Tracy, does not go well.

17. Don’t wait until the last minute to try a drastic hair style.

How I Met Your Mother: Marshall gets highlighted tips right before his wedding. Afterward, he freaks out over how ridiculous he looks and, in a panicked moment, grabs the razor and shaves off a strip of hair in the middle of his head. Needless to say, he ends up wearing a fedora for the rest of the night.

18. Be careful about taking any new medications right before the big day.

Sixteen Candles: As if she didn’t have enough to worry about already, Ginny gets stuck with painful menstrual cramps on her wedding day, and takes four muscle relaxers to help with the pain. She ends up passing out before the ceremony and barely manages to stumble down the aisle once she’s revived.

19. Tread carefully when deciding whether to include your pets.

The Brady Bunch: In the first ever episode, Mike (a father of three boys) and Carol (a mother of three girls) get married. During the ceremony, the boys’ dog starts chasing the girls’ cat around, completely disrupting the event. Mike and Carol might have been upset, but at least it made for good TV!

20. Make sure you get your partner’s name right at the altar. Friends: Everyone knows Ross and Rachel were meant for each other, but there was that time Ross got married to Emily instead. Clearly even he recognized that something wasn’t right, as he accidentally says “Rachel” during the vows. Yikes.

21. Whether you go with traditional vows or write your own, make sure they’re meaningful.

The Big Bang Theory: Penny and Leonard didn’t discuss their vows before the wedding, so she’s surprised at the altar when she finds out he wrote his own. In desperation, she ends up reciting lines from the song “You’ve Got a Friend in Me” from “Toy Story.” Turns out, that’s actually one of Leonard’s favorite movies, so while her vows might seem a little silly, they actually made for a touching moment.

22. Take a moment (or several) to celebrate your friends too.

Bridesmaids: Lillian might be marrying Dougie, but the real focus of this movie is her relationships with her girlfriends. While her bridesmaids may not get along most of the time, they all rock out to Wilson Phillips together. That’s what friends are for, right?

23. Make sure there’s plenty of booze.

Wedding Crashers: Before John and Jeremy settle down with their respective ladies, they attend a lot of time at other people’s weddings. The receptions are all very different, but one thing remains constant: when the alcohol is plentiful, the guests are happy.

The O.C.: It should be obvious, but in the craziness of your wedding day, it’s easy to get caught up and forget to enjoy yourself. That’s why we love seeing the always-adorable Seth and Summer get goofy during the ceremony.

25. Remember that your wedding is just one day, while your marriage is forever.

Downton Abbey: Anna has to deal with a lot of drama before her wedding to John Bates (including his estranged ex-wife), but she keeps a cool head throughout it all. In her own words: “I’d rather have the right man than the right wedding.”